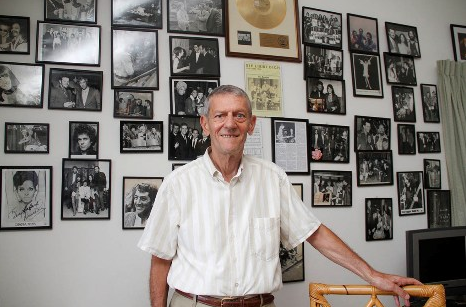 In one of the walls of the house with Larry Yaskiel (London, 1936) in Puerto del Carmen, Larry himself appears in dozens of photographs, very dark, bearded, always smiling, and many of them, sitting in his office he is surrounded by musicians. All images are over 35 years. In a photo accompanying Joan Baez and her family in another Jimmy Hendrix , another of ‘Bee Gees’ , or ‘Led Zeppellin’ , ‘Fleetwood Mac’, the composer Burt Bacharach , the Eurovision singer Sandie Shaw , Billy Preston and Tom Jones with the Queen of England. It also has pictures dedicated to Dean Martin and Diana Ross.

Larry worked in the music industry since the mid 50’s to late 70’s and is part of the history of rock and roll. One of his nephews asked him last summer in London to talk with children to help pass the subject of ‘History of British rock’. “What I did is now a discipline in the school”, says Larry, “and did not know at that time was to be a historical thing.”

Larry’s parents were importers of rock and roll albums of American, Chuck Berry or Little Richard . So the young Larry made ??contact with the music and the industry. The company Pye decided to open to the German market, creating the label Deutsche Vogue, and sent Larry, he was 20 years as liaison to sell to British groups in postwar Germany. Those were the days then they began to play four lads from Liverpool in the Starclub Hamburg, and with them, a fellow high school act, The Searchers , who were number two in sales and joined Larry.

The Germans liked to hear music in their language, so Larry translated some German songs, like ‘She Loves You’ by The Beatles when they “were not yet a phenomenon.” Then they introduced them in Germany and prepared the tour a couple of unknown guitar virtuosos, like Eric Clapton or Jimmy Hendrix.

In the late sixties he returned to London as the chief European American label A & M, and wanted to enter the world of British rock. He signed Hamble Pie with Peter Frampton, or Electric Light Orchestra also worked for Warner Bros. It was a time when rock and industry “made their own road.” There were no precedents, and Larry maintains that pirate radio installed in ships in England contributed much to the popularity of rock because until then the BBC aired only light music and boring.

Larry saw many concerts and listened to music all day. It was a profession of nerves because there was risk. Some groups were successful and others, most were a commercial failure. It was not the case of Miguel Rios, who in 1970 had recorded his ‘Ode to Joy’ . EMI rejected him but Larry bought the rights because he believed was a music suitable for all audiences. The young Rios scored three appearances on ‘Top of the Pops, with 17 million listeners and reached number three on a list that were also ‘The Beatles’, ‘Pink Floyd’ or Elvis Presley .

Larry has a great respect for the musicians. He says he created something from nothing, so you have to pamper them, and accompany them everywhere: recording, concerts … “They had to know that we were all day with them, had to be sure that I believed in them.”

When Larry decided to sign a group, signed a contract for three LP’s because he believed and believes that for the first album the artist has “no thought”, merely to tell their life experiences, the second “is the first thing you think “and you can see if you have talent, and the third is a second chance.

One of the groups that used this method sold 800 copies of their first two albums. The third, ‘Crime of the Century’, went gold, and the group ‘Supertramp’ sold 57 million albums.

He says he was “very happy” in the business of music but also listening to music, but the life was very expensive and hard work. In fact, in 1973, he was overwhelmed and this forced him to be caught leaving for vacation and a place away from the music industry. He went to Jamaica and met a producer who invited him to party on your boat, but he wanted peace, so he left his house and went to the other end of the island, a separate house in a quiet place.

The first day went for a walk and suddenly heard music coming from a house. He looked, and could make several Rastafarians playing with a white face. It was Keith Richards, who along with four other ‘stones’ had rented five houses in the same place and were preparing their album. Richards invited him the next day at his ranch in Dunn’s River Falls. On another occasion, tells Larry, he went home with Chas Chandler, bassist of ‘The Animals’ and Jimmy Hendrix’s manager and found the guitar genius doing cross stitch. “People thought he was like the wild man of Borneo”.

But Larry wanted to find a place that had the sun and came to Lanzarote on holiday. A few weeks before he was paid $27,000 for expected record sales of Leo Sayer in Argentina, and strolling along the Avenue de las Playas found an apartment that cost exactly that money. He bought it and began to come in winter with his wife Liz and he decided to stay. He spent two years “doing nothing” then a German friend told him that Lancelot was reaching for a magazine in German and needed a translator. That seemed interesting, but then did not even speak “Castilian Chinese” that he claims to speak today.

Then he met two people who marked his career on the Island: Cesar Manrique and Agustín Pallares, who had three Lanzarote history books written in English. Larry and was fond of history, but he ran past the bug biting conejero and when he started with the release of Lancelot in English , began to reflect on their pages for the British residents and tourists to know more of the beach and Lanzarote the sun.

Today, after 122 issues of the magazine, has given all the copies to the Center for Teachers “for the paper is at school and children can learn English and other things,” such as Shakespeare in his works speaking of wine Malvasia. For his interest in history, he also ended up finding the descendants of Lanzarote who founded San Antonio in Texas.

Last March, the British ambassador to Spain invited Larry and his wife to the reception which took place in Madrid for Prince Charles and his wife Camilla. Larry did his time as ambassador to Lanzarote and told them about César Manrique and explained that the island is a Biosphere Reserve.

The British Ambassador said that it is a keen interest for Prince Charles, and Larry gave him a dossier of information on .