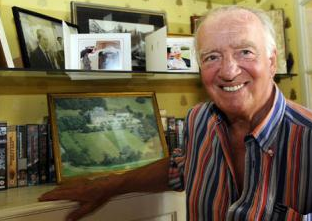 Sir Ernest, a well known Lanzarote resident, has realized another of his dreams, The Camel House, a concert hall for young music talent.

What has captivated Lanzarote where you live as usual and that has created a concert hall for young musicians?

Twenty years ago my son was looking for a quiet place which was more than a sun holidays. The first time I visited Lanzarote I was fascinated by its culture and its people. Every day I like this island, which I love. It’s landscapes and colors are fantastic. Fifteen years ago I bought my current home of Macher and few years later, the next, which created the concert hall, The Camel House Concert for young musicians from around the world can offer here their performances and enjoy a few days in this wonderful island I love so much. Since I saw that house, I figured it would be an ideal concert hall, as it has. It was exciting. Both buildings are centuries old.

You discovered your passion for music at an early age, while still a student at the school in Lancashire (northwest England) in your ??primary education. How was that experience?

My parents did not like music but it was when I was seven or eight when I began to discover my feelings through music. My passion was and is so strong that I think is one of my greatest motivations for living. I did my musical training as a pianist at the Royal Manchester College of Music, a very prestigious conservatory in England. Unfortunately, when I finished my studies in piano I thought it was possible to pursue a career because there were many good pianists. Is not the same as a good pianist that almost good. That is why I decided to quit music for my time free up a company in the textile industry in Leeds dedicated to the manufacture of clothing.

You come from a poor family and made ??the clothing factory your first major empire, largely assembled from scratch in the seventies. How did you get on with the business at that time?

In my book How to be a failure I succeed and to know my successes and my failures. Always think that you can turn failure into success thinking that should go in the right direction and take it. The fact of not trying already leads to failure. Along with this we must bear in mind that luck is very important in life and help solve problems. With conviction and self confidence you can overcome difficulties. I am the eldest of three brothers and I remember that despite the difficulties, life in Lancashire with my parents, who were hard workers, was fantastic. There I found inspiration for my life and I think that life and business without it and without art are nothing. I decided I had to do something because I was not going to dedicate professionally to music and so much effort rode with my garment factory, which sold around 1983.

The money earned from the sale of its factory was invested in creating a large business complex, Dean Clough, Halifax, which did not forget the artists or music. What is this project, which started fifty years ago?

I decided I had to do something with the money from the sale of the textile factory and reconverted the Dean Clough complex, in a large enclosure in which business are installed around two hundred companies. There are also art galleries and a theater. Artists go there and pay nothing to create and develop their inspiration. Dean Clough is very important to me, like art, which is the inspiration for life. When I started my first business I was inspired also in art.

Dean Clough has been an example of urban regeneration of an industrial area. Queen Elizabeth II in 1998 awarded you a knighthood for your entrepreneurial achievements and philanthropy. Did you expect this distinction?

It was a big surprise for me, but I am very proud of this title. In England it is very important, but in Spain knighted does not mean much. The ceremony was very exciting. Queen Elizabeth II put a sword over my shoulder and knighted me. After lunch with ten others in Buckingham Palace. I remember sitting on her left. The queen is very friendly and nice and I guess the same goes for other queens, such as Spain, Queen Sofia. I do not remember exactly the words I told Her Majesty Elizabeth II, but I remember the event with much emotion.

As an entrepreneur which you have been, what do you think the current situation of crisis?

In my life it was always important to think that the economic crisis would be forever. That to me was the only way to think, innovate, because I think it’s much better live the present to be thinking about the future. – When you turn on the TV and see the violence of street youth in England, what do you deserve?

It is unfortunate what is happening. Violence leads nowhere. I think the chances of young people today are many and there is reason to carry out your ambitions. It seems a great waste of talent, sure have a lot of young people who have participated in these clashes.

You mentioned the great cellist Pau Casals was and one of the best conductors of his time. Do you admire other Spanish musicians and artists?

Spanish composers I admire Manuel de Falla and Isaac Albeniz. In fact, the two musicians that I have housed near the concert hall in the village of Macher I have called House Falla and Albéniz House, respectively. On the other hand, the actor Javier Bardem I feel was great. I really liked his films The Sea Inside and No Country for Old Men. I do not understand how you can make as good performances in both, though the sentiments conveyed in the records of each are very different.

Do you play any other instrument besides the piano?

I love jazz, but unfortunately I can not touch it, so I play the music I like and what I can do best, playing the piano. The most I’ve been recorded concertos by Chopin.

What has it meant to you the creation of the concert hall in Macher, a new initiative on the island?

It meant for me to realize another of my dreams an island as great as this to raise awareness of the talent of young musicians. The Camel House is the name we chose for the audition room and concert series that we made ??the call Camel House Concerts. The house is over two hundred years.

What will the next concert be?

30 October. On the one hand, the recital of Jennifer (violin) and Jeremy Pike (piano) and the other, the Arsha Kaviani (piano). The day before Stratvs act in Bodega, La Geria.