Tourist employers transfer their concerns for the sector to the government 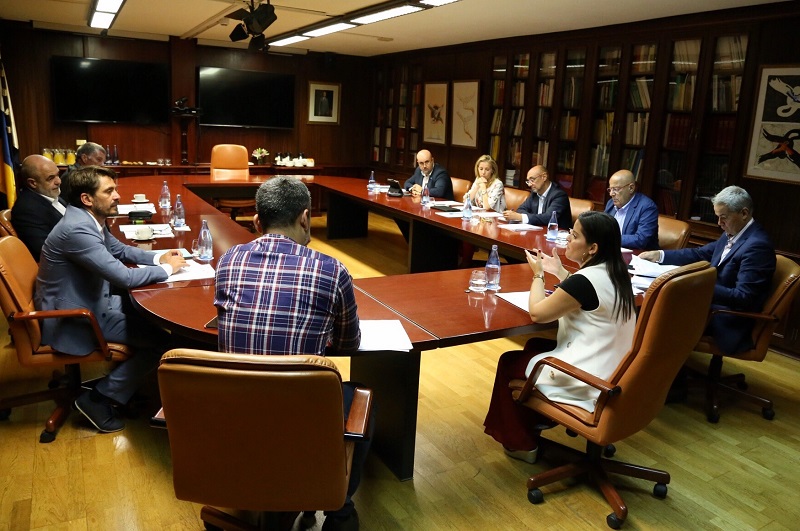 The top officials of the Canary Islands tourism employers – Ashotel, FEHT, Asofuer and the Tourist Federation of Lanzarote, which integrates Asolan and Aetur‒ held a first official meeting with the Minister and Deputy Minister of Tourism of the Government of the Canary Islands, Yaiza Castilla y Sergio Moreno, in order to test in a general way how is the main economic sector of the Islands and with the objective of transferring those that, in his opinion, constitute the decalogue of the most important issues that must be undertaken from public administrations in the field Touristic in the Canary Islands.

The presidents Jorge Marichal, José María Mañaricúa, Antonio Hormiga and Susana Pérez, accompanied by the vice president of FEHT, Thomas Smulders, and other technical managers such as Ashotel and FEHT managers, Juan Pablo González and Fernando Mathías, respectively, analyzed with the The Ministry team first of all the current tourist scenario, with the uncertainty of Brexit , the recession of Germany and the changing habits of many Nordic tourists, concerned about the environmental impact of air transport.

The air connectivity of the Canary Islands is one of the most prominent issues at the moment, following the announcement of the closure of bases in the Islands by Ryanair, which should lead to the search for alternatives to cushion the loss of these places.

In addition, the noted increase in air prices by the Ministry of Development, after the application of the 75% bonus for residents, also requires corrective measures that can resolve this deviation without touching the discount to which the Canaries are entitled and that It both facilitates your mobility.

The return of the Canary Islands destination to the positions before the Eastern Mediterranean crisis obliges, from the employers’ point of view, to increase public contributions for tourism promotion, with at least a minimum annual item of EUR 2 4 million, compared to to the current 19, increase that allows to reinforce the different promotional actions.

In this sense, the employers exposed to the new Tourism team the need for the strategic condition of this area to correspond to a correct public financing, a reality that the current Canarian Vice President and Treasury Advisor, Román Rodríguez, admitted in the debate Monographic politician organized by Ashotel last May on the occasion of the regional elections of 26M. In that appointment, Rodriguez acknowledged that Tourism was under-budgeted in public accounts and that at least 100 million investments should be allocated per year for this industry and the employment it generates to remain in leadership positions.

Also, hoteliers consider an improvement and increase of resources for the Tourist Inspection fundamental, a technical body currently formed by only 14 inspectors. These face numerous irregularities, mainly to illegal accommodation and non-compliance with due use, advocating, in addition, temporarily limiting the compatibility of residential use in tourist complexes that is established in the last reform of the Renewal Law.

In relation to this regulatory area, hoteliers advocate adapting the tourist accommodation regulations, specifically the modality and category requirements in the apartments, which are the ones that suffer most from unfair competition from unregistered and illegal vacation homes.