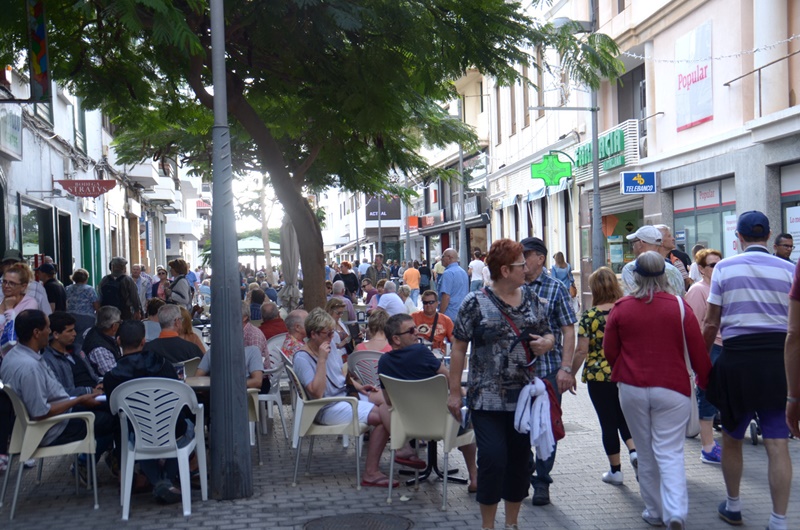 The Data Center of the Cabildo de Lanzarote, Department of Education, Citizen Participation and Youth Area coordinated by the Minister Paula Corujo, has begun the digital distribution of the Statistical Yearbook of Lanzarote 2018. This publication, which has been carried out for twenty-eight years, is The most complete and comprehensive statistical summary that is carried out on the island and has become a reference document to know the island’s reality.

Corujo, affirms that “it is the most complete and exhaustive publication of the Cabildo of Lanzarote that is carried out on the Island since it deepens the most relevant information of the main socioeconomic indicators of the island of the year 2018 and the first chapters are dedicated to the areas geographical and demographic. “

The island, which has an area of ​​846 square kilometers, had a right population of 149,183 inhabitants in 2018, of which 41% resided in the municipality of Arrecife. 22% of residents in Lanzarote are of foreign nationality, mainly British, Moroccan, Italian, Colombian and German. In addition to residents, the average tourist population is 55,011, with the total number of people on the island exceeding two hundred and four thousand.

ECONOMIC INDICATORS.- The Statistical Yearbook of Lanzarote 2018 dedicates a broad chapter to economic indicators such as the number of companies, price indices, information on the primary sector (agriculture, livestock and fisheries), construction, commerce, public sector and mortgages.

TOURISM.- In the tourism section the lodging offer is collected in detail, which amounts to 71,852 places in collective establishments and that had an occupancy record of 82%, with a 3% increase in the price of the average daily rate. During the past year, Lanzarote recorded the visit of 3,063,316 tourists, 2.6% less than in 2017. And in the publication the data of the average stay and the expenditure of these tourists are also recorded.

LABOR DATA.- Lanzarote’s labor data include the 4.4% increase in Social Security affiliations, yielding a figure of 56,709 members. Also in the labor aspect, it is worth noting that last year 71,805 contracts were made on the island, of which 9 out of ten were temporary and, within these, 56% lasted less than three months.

As for the registered unemployment figure, although 4.5% was reduced, the island still had 10,879 people in December 2018 in this situation. The year 2018 ended with an unemployment rate of 19%, slightly lower than that of the Canary Islands, but somewhat higher than the rate in Spain.

The fourth chapter of the Statistical Yearbook of Lanzarote 2018 is dedicated to water, energy and waste. As a highlight, there is a new rebound in fuel prices during 2018. On the other hand, the evolution of electric power indicators stabilized, as did those of water production and consumption.

TRANSPORTATION.- A section on the transport of the island is also available in the document. In the case of air inflow, the number of passengers stabilized during 2018 with a figure of 7.3 million. On maritime transport, we can say that the transit of goods increased by 2% and the cruise passengers amounted to 423 thousand. And the most significant data of land transport was the five million travelers who were counted in the urban and urban public buses, on an island that has a park of more than 129 thousand vehicles.

EDUCATION AND HEALTH.- The social section shows education figures (with more than 24 thousand students enrolled in the 71 existing non-university education centers) and health on the island. As well as crime rates, which dropped 8%. Also included are judicial and violence data on women.

The Statistical Yearbook of Lanzarote 2018 is only available in digital version and can be consulted and expanded on the website of the Data Center of the Cabildo de Lanzarote, whose address is www.datosdelanzarote.com. On this website you can also consult updated information on the different island statistical indicators, as well as the 2,300 documents and reports that are organized in various thematic areas. People who wish can request specific information in the mail data@cabildodelanzarote.com . And the department also offers a geographic information system on infrastructure and island equipment.

Finally, the Data Center also has the historical information service called Digital Memory of Lanzarote (www.memoriadelanzarote.com), which offers the user thousands of photographs, videos and historical documents of the island. And since 2015, the Data Center manages and produces the contents of the exhibitions of La Casa Amarilla, the former headquarters of the Cabildo in Arrecife, which has been converted into a museum of memory and knowledge of Lanzarote.