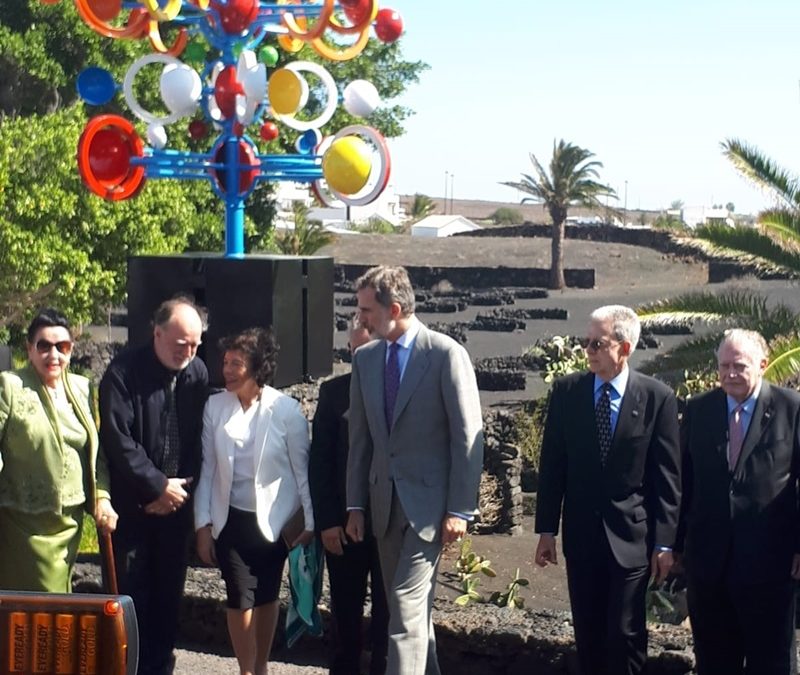 The King of Spain, Felipe VI, accompanied by the main public offices of the PSOE, attended this Wednesday the call of the César Manrique Foundation (FCN) for the centenary of the Lanzarote artist.

Thus, Felipe VI, accompanied by the Minister of Education, María Isabel Celaa; and of the President of the Canary Islands Government, Ángel Víctor Torres; the president of the Parliament, Gustavo Matos and the president of the Cabildo of Lanzarote, Dolores Corujo, among other public positions, as well as the brothers of the artist, inaugurated at the César Manrique Foundation, in Taro de Tahiche (Lanzarote), the main exhibition mounted by This cultural entity to celebrate the centenary of the Lanzarote artist.

The exhibition “César Manrique. It’s a pleasure. (A popular icon of the twentieth century)” , which will open to the public, starting at 7:00 p.m., dialogues and interacts with Taro de Tahíche (whose permanent collection has been dismantled to make room to this temporary proposal) and presents an iconic reading of the artist.

More than 400 photographs, both of the public and private sphere of the artist, and a total of 17 audiovisuals, make up the bulk of this large-format exhibition, which occupies a total area of ​​1,600 square meters. The newly created audiovisuals are commissioned by the curator to the filmmaker Miguel G. Morales and include 10 newly created testimonial documents with interviews with personalities from various fields of culture reflecting on César Manrique: Joaquín Araújo (naturalist), Alberto Corazón (graphic designer and artist), Juan Cruz (writer and journalist), Waldo Díaz Balart (painter), Elvireta Escobio (writer), Elvira González (gallery owner), Fernando Menis (architect), Frei Otto (architect), Fernando Prats (town planner and architect) and Wolfredo Wildpret (Professor of Biology).

Also, reproductions of his Carnival masks will be exhibited, ceramics that he designed in the fifties, paintings painted by the artist; different rooms of his house Taro de Tahíche will be set; and numerous objects belonging to the creator of the Jameos del Agua (mannequins, books, clothing, African sculptures …), personal diaries, original posters of his national and international exhibitions, magazine reports, postcards of his trips will be displayed and large collage albums made by the artist.

In the words of Gómez Aguilera, the exhibition offers “a visual story” through the use of graphic, audiovisual images and other elements mentioned above , “to create an argument and embody a complex subjectivity around a lifestyle, a form of being from an artist, César Manrique, and an active relationship with a territory, Lanzarote “.

In this sense, the commissioner of the project explains that Manrique, turned into “fetish of his island”, “lived in permanent idyll with the camera” and presented himself as “a hypermodern, intuitive, close, diverse artist, with a public presence vigorous, contemporary of his time, but also anticipating new senses, especially in relation to the landscape and the opening of art towards novel behaviors. ” And he adds: “Manrique claimed himself as a painter, but his desire was exceeded by the reality of an artist-character with as many folds as immersions of a matrioska. A real challenge for the consolidation of identity in conventional terms.”

This unique and singular exhibition, produced by the FCM as its central Centennial exhibition, explores “the process of building Manrique as a public figure”, through an intense media projection, associated with Lanzarote and his house Taro de Tahíche , “where he developed an aesthetic of pleasure that transformed art into life and life into the art of living. ” In the opinion of Gómez Aguilera, “César becomes the logo of the island, the iconic image not only of himself but of a project of modernization, tourist transformation and enhancement of a landscape that he flags and symbolizes immersed in a kingdom of fascinating images that the artist creates while creating him “.