Tourism continues to bring Lanzarote residents out of unemployment 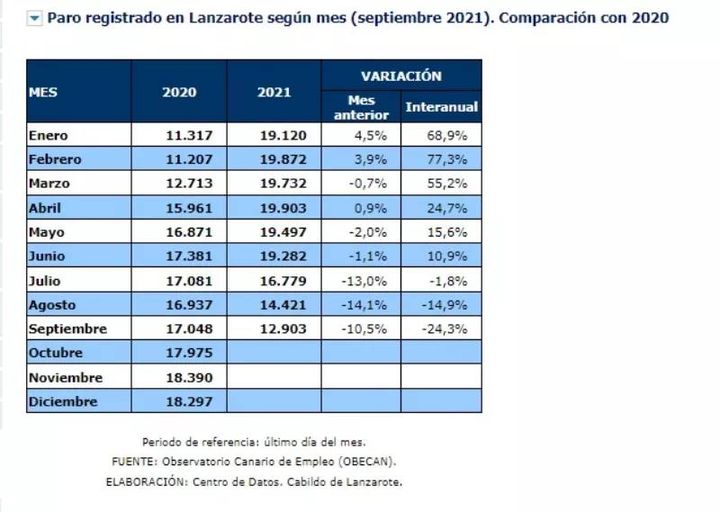 Thanks to  LANCELOT DIGITAL

Tourism continues to drive unemployment in Lanzarote. The tourist locomotive began to do so in June and has not stopped removing people from the Inem lists throughout the summer. Indeed, Lanzarote closed September with 1,518 fewer unemployed than in the previous month. According to data from the Data Center of the Cabildo de Lanzarote, extracted from the Canarian Employment Observatory, September ended on the island with 12,903 unemployed, a figure that, if compared to September the previous year, represents a reduction of almost 25% ( 24.3%) since the number of unemployed at that time was 17,048.

This trend has been repeated throughout the summer, from August to July, unemployment fell by 2,358 people and from June to July, by another 2,503. In total since the summer began in June, when the island had 19,282 unemployed, the number of unemployed has fallen by 6,379.

On the other hand , September ended in the Canary Islands with 20,699 fewer unemployed , this is 8.84 percent less compared to the previous month. In this way, the unemployment lists in the archipelago include 213,558 people, according to data published this Monday by the Ministry of Labor and Social Economy.

In the national group, unemployment fell by 76,113 unemployed in September (-2.3%), its greatest decline in a month of September within the historical series, reaching at the end of the month the figure of 3,257,802 unemployed, its lowest figure since February 2020 (3.24 million), just one month before the Covid pandemic was declared.