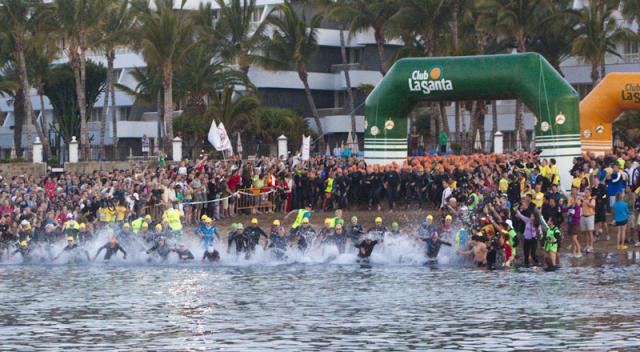 An unrivalled test of strength, character and mind-body excellence. The motto says it all: “Normal limits do not apply”.

Nowhere else is the awesome power of nature to create and to destroy more apparent than on Lanzarote. One of the seven Canary Islands belonging to Spain, Lanzarote is only 120 km from the West Coast of Africa. On this island that captivates visitors with its dramatic scenery, picturesque villages and unique style, probably one of the toughest races in the world is held every year.

Thanks to James Mitchell for the photography

The race is fully supported by the Canarian and Local Government. Club La Santa holds the license for the Ironman Lanzarote Spain and is the organizer of the race.

The 20th Ironman Lanzarote Spain will take place on Saturday, May 21st 2011 in Puerto del Carmen.

The race attracts both pro and amateur athletes of all nationalities. The top 6 male and female finishers in the professional class are eligible for the prize money. The total prize money is 25.000 US$.

The Ironman Lanzarote Spain Triathlon is an official qualifying competition in Europe for the Ironman Triathlon World Championship on Hawaii.

Every athlete who wishes to participate in the Ironman Triathlon World Championship in Hawaii has to qualify, and this event awards 55 slots for the Championiship. The 55 slots are allocated to age groups according to the number of participants in each group, guaranteeing always at least one slot in each group.

Swim Course
Distance: 3.8km
The swim course takes place at Playa Grande, Puerto del Carmen, the main tourist resort of the island. It is a two-lap-course with a short running passage between the two laps.

Bike Course
Distance: 180.2km
The course, renowned for challenging athletes with strong island winds, takes you all around the island with over 2551 m. of climbing. Participants will enjoy amazing views and will have lots of support from the volunteers along the way. The bike circuit will be open to traffic and circulation will be controlled by the police.

Distance: 42.2km
Consisting of 3 laps, first one of 21.10km until Playa Honda and then two of 10.55km each, this course is run on the flat seafront along the Avenida de Las Playas, Puerto del Carmen. You will enjoy beautiful views of the ocean under the intense Lanzarote sun, while feeling the impressive support of thousands of spectators alongside the run course.