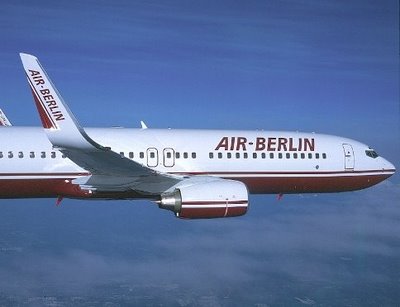 The Lanzarote Tourist Board and Air Berlin have renewed their cooperation agreement for the second consecutive year. The agreement was signed during the International Tourism Fair in Berlin by the mayor of Teguise, Juan Pedro Hernández, the Minister of Tourism of the Cabildo, Carmen González, director of the Board and Hector Fernandez. On behalf of Air Berlin, Alvaro Middelmann-Blome, Director General of the company for Spain and Portugal, and Paul Caspers, deputy director for Spain and Portugal have signed.

The agreement is negotiated for a period of twelve months and aims to encourage the development of Lanzarote as prime tourist destination among the major markets of the airline. The focus is on joint marketing activities and distribution, such as advertising, web presence on the island and press trips.

Through the site developed jointly by Air Berlin and Lanzarote Tourist Board, www.airlebe-lanzarote.de , German-speaking passengers travelling to the island can get extensive information on cultural, sporting and tourism. You can also choose and book directly on that page a travel package that includes accommodation, transport to and from your hotel and Air Berlin flights.

In the summer of 2011, Air Berlin will offer nonstop flights to Lanzarote from nine German cities and from Vienna and Zurich from 129.99 euros per trip, including taxes and top bonus miles.