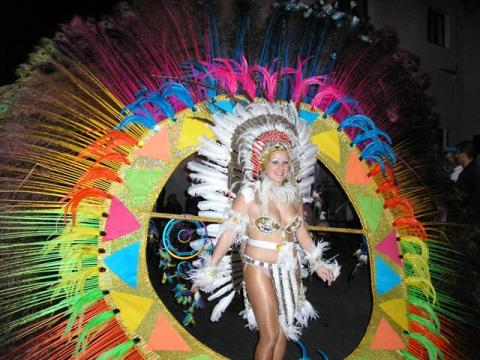 The program Arrecife Carnival 2011 , which begins next Friday at 8pm in the esplanade of the Castillo de San Gabriel , was presented Tuesday. The Batucada Villa Pipol will be the opening act and then the comedian Matías Alonso, who will read the proclamation of the Carnival of the capital. Alonso will come dressed in ‘Gines’ Chona’s brother, and will bring many surprises to amuse the audience.

Furthermore, in a festival where the opera will permeate all corners of the city with their majestic, classical and theatre, it will be a time for remembrance and tribute to the late Sunday Brito. In fact, this Thursday will open the photo exhibition “25 Years of Carnival in Memory of D. Sunday Brito”, which will be accompanied by a video of Carnival 1985-2010. The exhibition will remain open in the Sociedad Democracia until next March 13.

The parades will also return this year to the centre of Arrecife. One of them will take place on Thursday 3 March at 18.00 hours, with the Parranda Los Buches, and another on Saturday, Nov. 5, at 12.30 hours, and Comparsas Batucadas from the Canary Islands.

During the presentation of the program, the City Council also confirmed that this year will be five candidates for the Carnival Queen and nine aspiring Queen of the Elderly, The number of participants at the XII Gala Drag Queen which is unknown, will take place on Sunday, March 6, at 2130 hours. This Gala will be presented by “Nacha La Macha”.

In regard to the Grand Gala Art and the Election of the Queen of Carnival 2011, held on Saturday, March 5, at 2130 hours and will feature performances by Yanely Hernandez, Eloisa and Lili Quintana, Comic Instinct, along with actor Matías Alonso.

For its part, the Gala Election of the Queen of the Elderly will be held Saturday, February 26, at 19.00 hours, with the participation of 9 candidates and the performance of the musical group “The Consortium”. Meanwhile, the Queen Children’s Choice will be held on Sunday 27 February and will be accompanied by Ana Mena, the winner of My Camp Rock Disney Channel.

The XXI Murgas Contest, the Grand Parade of floats, the carnival for children and the Burial of the Sardine close the festival program of Don Carnal in Arrecife.

The Masquerade Ball will be held on 4, 5, 7 and 9 March and are enlivened by the orchestras Tamarindos, Lanzarote Swing, Suso and Family, Journey, The Warren, Salinas Atlantic Quartet Show.

Also participating in the dances of the Carnival of the capital are DJ Doctor Geiperman Machinery, Band, Banda Nueva Banda Rika and DJ Latino.

The mayor of Arrecife, Candido Reguera, said the group’s intention was to recover the city government carnivals of yesteryear, where sailors fishing activity lasted a few days and everyone involved in the festivities.
“Society has changed and now arrecifeña live on tourism and therefore we must make our carnival a tourism attraction for it to receive tourists for its Carnival and at the same time, this will improve our economy. If Carnival is a success, it will be a success for the economic activity of Arrecife” said the mayor.

Reguera also stressed the need for the carnival to be allocated between the downtown and the fairgrounds , balancing fun with the rest. “We believe that the streets of the capital have to live the arrival of Don Carnal carnival joy and fun,” he added.

Reguera Candide finally informed that the City of Arrecife, will increase (during the festivities) the cleaning to areas of the Carnival. In this regard, he said the council will increase its allocations of cleaning for holiday areas and would ensure that they are clean first thing in the morning.