Artists of the Royal Opera House in Lanzarote 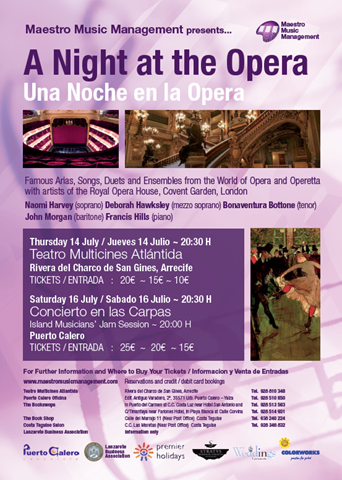 Another great team of opera singers will be arriving on Lanzarote in July for two concerts on the Island. The directors of Maestro Music Management have booked four outstanding singers and

a piano accompanist to produce “A Night at the Opera”.

Maestro MM have been producing concerts in the Canary Islands for the past three years. There are three Principals heading this small UK-based company, and each specialises in a different music genre. This particular programme has been devised and will be directed by John Morgan, the Principal responsible for opera and Artistic Direction. John is now a familiar face on Lanzarote’s music scene, having delighted audiences here during the past few years with his wonderful voice and stage presence.

The concerts are organised by Kim Colvill and her son, Luke. Kim and her pianist husband Robin, have a long association with Lanzarote. Over 26 years ago they became engaged at a lovely restaurant in Costa Teguise and they have been enjoying visits to the Island ever since. In the early days Robin gave concerts in Jameos del agua and more recently in the Cuevas de los Verdes and he will be one of the four pianists performing the “Piano Extravaganza” concerts here in September.

John Morgan will be performing in the July concerts and he is joined by
Soprano Naomi Harvey, Mezzo Soprano Deborah Hawksley,
Tenor Bonaventura Bottone and Pianist Frances Hills

All the performers are Artists of The Royal Opera House, Covent Garden, London and soloists in the own right with recitals, oratorios and chamber concerts both in the UK and abroad. Maestro MM is especially pleased to have booked the fantastic tenor, Bonaventura Bottone, who has a distinguished career in opera and oratorio. Bonaventura has performed roles at all the major opera houses around the world alongside the world’s greatest opera singers, under the baton of the finest conductors. Check out his website to read his biography and learn about his Italian relatives and his connection with the pretty hill town of Scala in Italy.

An important feature of all the concerts arranged by Maestro MM is the Concert Programme. A great deal of thought goes into choosing an accessible range of arias, songs and music that audiences will recognise and enjoy. No one piece or aria is too long and hopefully never boring! They especially like to put on concerts that are entertaining and uplifting, with inspirational music that creates a magical atmosphere.

Tickets can be ordered through the LBA, or bought from www.maestromusicmanagement.com, the Box Offices of both venues, from Bookswaps in Playa Blanca and Puerto del Carmen, The Book Shop and Costa Teguise Salon in Costa Teguise and at the door on the night of the concerts.