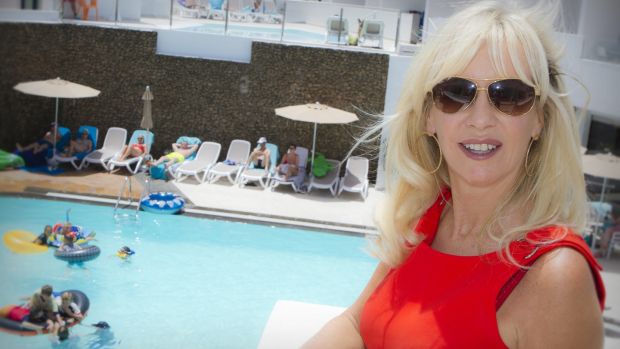 This article has just been published in The Irish Times

‘In the 10 years I’ve been in Lanzarote, I’ve set up five businesses’ Geraldine McFadden runs a boutique hotel popular with Irish tourists

Geraldine McFadden: “The way of life here is so totally different to Ireland. Everything operates at a much slower pace. Traffic is never a problem and we could never compare the weather here to Ireland.”

Geraldine McFadden was bitten by the travel bug at a young age. “My father was chief engineer of the cargo airline, Aer Turas, so my family travelled a lot,” she says. Educated in Portmarnock Community School in Dublin, she went to live in Lyons in France for two years after completing her Leaving Cert and did a diploma course in French while working in an English bar at night.

“I returned to Ireland when the airline business took a change for the better, and I was part of the start-up at Ryanair in Ireland. In the beginning with Ryanair, we were all customer service agents. Working check-in, boarding gate and then cabin crew on the flight.”

McFadden first worked as a cabin crew member on the HS 748 – the turbo prop aircraft that Ryanair first used.

“The travel bug got me again. So I moved to Mallorca for three years working for Club Travel. ”

She went from Mallorca to Lanzarote where she worked initially for Aer Lingus Holidays, then for various other companies. “In those seven years, I fell totally in love with the lifestyle and climate of Spain, and learned to speak Spanish.”

The airline business called again, and McFadden was part of the original cabin crew when Pat Byrne set up Virgin/CityJet in 1993 as a business airline between Dublin and London City Airport.

“My career then took a totally different route when I went to work for the serviced office company, Regus, now called IWG, as sales and marketing manager for Ireland. I went from this to working in property investments for several years. But the travel/holiday business was still where I wanted to be.”

McFadden returned to live in Lanzarote 10 years ago with her then six-week-old-baby, and her two-year-old-toddler.

“Initially I came back to sell property. But when the downturn started, I was asked to manage the Bitacora Club. From there, I went on to become commercial director for Costa Sal. ” Two years ago, she opened up and started managing Aqua Suites.

Aqua Suites is a boutique hotel based on McFadden’s experiences of travelling, offering first-class accommodation with good food and service. “We don’t say ‘no’ at Aqua Suites. There is always a solution. We offer separate room in suites for the kids and a la carte dining.”

When McFadden opened the suites, just under two years ago, business was buoyant as many of the popular resorts such as Tunisia, Turkey and Egypt were closed.

This year sees the re-opening of these resorts, so it is a more challenging for Lanzarote and the Canary Islands. The weak sterling exchange rate is not helping to boost the UK market either. However, Irish tourists still flock to Lanzarote and it is one of the favourite destinations for them.

“There is noticeably less red tape in the Canary Islands and mainland Spain compared to Ireland for those who want to set up a business. In the 10 years I’ve been in Lanzarote, I’ve set up five separate businesses which is something I couldn’t imagine doing in Ireland.”

As well as managing Aqua Suites and her position as commercial director of Costa Sal, McFadden also franchises the food and beverage side of the business in both hotels and has a Mexican restaurant in the old town.

“Currently between all three businesses, we are employing 60 people.”

The single most important factor in successfully moving to Lanzarote is to learn Spanish, according to McFadden.

“While it’s possible to come to Lanzarote and operate in a totally English-speaking environment, speaking the local language adds a new dimension to the overall experience. It allows you to meet and communicate with local residents and provides you with a much greater understanding of the social and cultural aspects of your adopted home.”

If considering emigrating to Lanzarote, McFadden recommends starting with an intensive language course. “This provides an opportunity to meet like-minded people and gives you the key skill needed to make the most of your newly adopted home.”

While it’s difficult to be specific about business opportunities in Lanzarote, McFadden says the key is to be constantly on the lookout, “recognise opportunity when it comes along and be ready to take the plunge”.

She is a member of the Lanzarote Business Association which helps to promote business development on the island. In addition, it provides an information service to members keeping them updated on changes in legislation regarding all aspects of business including tax, health and safety, employment regulations and environmental issues.

“The way of life here is so totally different to Ireland. Everything operates at a much slower pace. Traffic is never a problem and we could never compare the weather here to Ireland.”

McFadden’s future is definitely in Lanzarote. “Apart from anything else, my two children (aged 10 and 13) regard themselves as Canarian and, even though they were both born in the Rotunda in Dublin, they will often say that they were born in Lanzarote.”