Interview with the Alcalde of Teguise 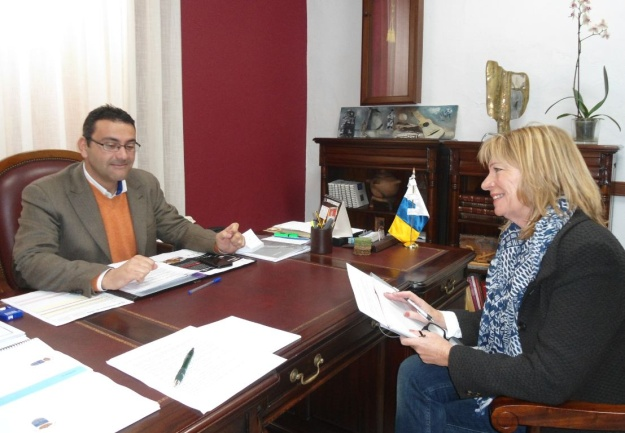 We recently had the opportunity to meet and chat with Oswaldo Garcia Betancort the Alcalde (Mayor) of Teguise. We met early one morning at the Acalde’s office at the Ayuntamiento in Teguise.

LBA. Good morning and thank you for taking the time to meet with us, can we please ask what a typical working day would involve for you?

OGB. It can of course vary, but on a normal day I would get up at 05.45 and I am always in my office by 07.10. From then until 10.30 is when I go through the days plan and correspondence and deal with general business. After 10.30 is when the days meetings begin, I meet daily with many people including associations, and with representatives and individuals from my municipality, dealing with their questions and any problems they may have. My diary is planned so that every six months I hold open meetings in the different towns that make up the municipality i.e. Costa Teguise. My work often extends into the evening, continuing with various meetings.

LBA. I understand you were born in Lanzarote in 1976, and studied law and real estate at university in Gran Canaria, have you ever lived in any other country and are there any countries that you would like to live in?

OGB. Yes that is correct I was born here and later attended university in Gran Canaria. On my return I joined the family business where I continued to work until entering politics. I enjoy living in Lanzarote but if I had to leave I would probably choose to live in Canada, I admire the culture that Canada has and it seems a very motivated place. If choosing to live within Europe it would of course be Belgium; home of the European Parliament.

LBA.Can we ask about your family?

OGB. Of course my parents and family all still live in Lanzarote, family and family traditions are very important to me; I am married and have a young daughter and have extremely close connections with my family.

LBA.We understand you joined the Canarian Coalition Party in 2005, what was it that motivated you to enter politics?

OGB. My wife was working for the Canarian Coalition in the Cabilido and through her work my interest grew. The C.C. had never had a strong leader in Teguise and it was thought I would be an ideal candidate. I am passionate about politics, but do not consider myself a typical Politian, I do not just talk the talk; my view is that action speaks louder than words. I enjoy helping the people and problem solving and making my municipality better for its residents and visitors.

LBA. Teguise is a large municipality, we think it consists of 23 villages how do you integrate with all those people?

OGB. Yes it is made up of 23 villages some large and some small. As previously mentioned I make myself available to meet with individuals on a daily basis and regularly visit the areas to meet with the people. It’s important that the people know that I am here for them and am happy to meet with them.

LBA. You were elected Alcalde in May 2011 and we think you are the youngest Mayor ever to be elected in Teguise? This was a huge achievement how did that make you feel?

OGB. Before being elected I was a councillor for 6 months, and yes I am the youngest person to be elected as Alcalde, not only in Teguise but in Lanzarote and I believe also in all of the Canary Islands. It was a huge achievement and I feel extremely proud and privileged to have been elected.

LBA. Since you were elected what do you consider has been your greatest success?

OGB. Where to begin, I feel we are already exceeding our expectations; we are now financially healthy, our loans at the Ayuntamiento have been refinanced, and we are able to finalise the “Plan General”. The Tahiche road has been completed, the paseo in Costa Tegusie is in its final stages, the new Secondary School in Costa Teguise has opened and the goats have finally been moved from the centre of Soo! Plans are also in place for the cultural centre in Costa Teguise.

LBA. You mentioned it and there is a lot of talk at the moment about the “general plan for Teguise” can you tell us about that and how it will affect areas like Costa Teguise?

OGB. The plan will allow for the opening of larger commercial areas which will be able to house larger businesses for both commercial and education purposes. Teguise has at present the largest number of self employed people and yet there are no industrial premises? At the moment 70% of the area of Teguise is protected, inhabitants must grow in order to capitalise on that but at a steady rate so as not to impair the economic resources.

LBA.How important do you feel it is for foreigners to integrate with locals and what more can be done to encourage that?

OGB. It is very important, everyone who pays there tax and rates in Teguise is classed as a local. From 2014 our website www.teguise.es, will be available in three languages, Spanish, English and German, and posters etc will also be in the three languages. We are supportive of all projects and improvements to integrate foreigners with the community, but there has to be the interest, in this instance we are here to support not lead, if people come to us with a viable proposition we will work with it, like we are with the LBA for the annual Christmas Concert. We also fully support the free intercambio idiomas that the LBA organise, a great initiative.

LBA. What if any changes would you like to see happen on Lanzarote?

OGB. The first would be to update the “Plan Insular” it has been 20 years since it was reviewed and we now need to give definition to areas, it is the only way to attract investors.

The second would be to make improvements to the recycling plant in Zonzamos and the third would be to change the legal situation to allow Lanzarote to be able to control the coastal areas, at the moment we have no power and are unable to make decisions in relation to these areas, that are currently controlled by a separate body called Costas.

In general I would like to see a change to the constant bureaucracy and processes that we have, it makes it harder to progress and move forward with the amount of paperwork we have to deal with.

LBA. Can you tell us why you are so passionate about your work and Lanzarote?

OGB. Lanzarote, like me has positive energy and enthusiasm. My personal life has not changed since I was elected as Mayor, I am passionate that every day I come to work I can work to help improve things, seek opportunities, set objectives and work for a better future. I am focused on improvement.

LBA. Lanzarote is fast becoming an Island associated with sport how do you feel about that?

OGB. The tourism market in general in changing and Teguise cannot just offer sunbeds, sea and hotels. It has to be competitive and offer more. We need to capitalise on tourism. My message to hoteliers would be renovate or die, we have to improve standards and widen our vision. A good tourist product has to be related to sport. I visualise the borough as a mini continent with culture, beach, sea, treks, walking, and agriculture and of course a variety of sports. We are busy at the moment promoting the Lanzarote Marathon that will take place in Costa Teguise on Sunday December 8th; this event is the second largest in Europe to involve handicapped entrants, London being the largest, and is an event we are hugely proud of.

Costa Teguise also hosts the annual windsurfing competition that is part of the world championship circuit. Teguise tourism will be heavily involved in marketing `Teguise´ at the international sports fairs, Teguise needs a different image and sport will play a major part in that new image.

LBA. Can you describe Lanzarote in five words?

OGB. Only 5 is difficult but; país, suela, sentimental,passionate y tranquil, the country, its soul, the sentiment, its passion and its peacefulness.

LBA. And finally when you have time, how do you like to relax?

OGB. First and foremost time with the family, they are the most important thing. I also enjoy watching pigeon racing; I do not keep my own birds but have always found it fascinating to watch. But for me the family will always come first.

We would like to thank the Alcalde for sparing us the time from his very busy schedule and for his interest in the LBA and its members.

In his office there is a picture of Juan Leal Gorez (1676-1742) who sailed from Lanzarote together with nine other families and became founder and first ruler of the first government of Texas San Antonio. Before crossing the Atlantic and making history across the world he was a member of the Ayuntamiento de Teguise.