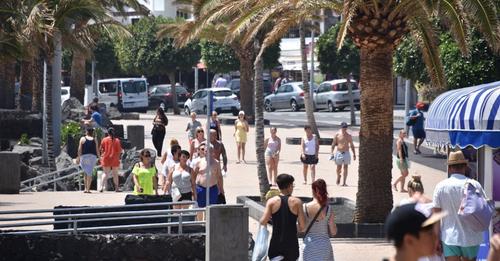 THANKS TO LANCELOT DIGITAL

Lanzarote recorded 55.3% occupancy last September in the 56,002 accommodation beds (38,795 hotels and 17,207 extra-hotels) offered by the 165 tourist establishments open on the Island (67 hotels and 98 apartment complexes), which housed throughout the last month to a total of 154,730 tourists .

This figure represents an increase of 35.5% with respect to the accommodation occupancy registered in September 2020 -which had 115 open establishments and 36,106 places in the market-, according to the Cabildo Data Center taking as a source the Accommodation Survey Tourism carried out by the Canarian Statistics Institute (ISTAC), which also sets the occupancy rate on the island at 66% (43% more) last month per available room or apartment .

This occupancy was translated into 929,656 tourist overnight stays -which represented a spectacular increase of 334% of those registered in September 2020- for an average stay of 7.23 nights , which was an improvement not only compared to the same month last year when the average stay was 6.28 but also compared to August 2021 when it rose to 6.98.

The average room rate was 87.40 euros (17 more than last year), set at 99.4 euros for hotels and 56.9 for non-hotel establishments. These prices yielded an average daily income per available room of 57.7 euros , a figure slightly more than one euro lower than August this year but which represented an increase of more than 41 euros compared to September last year, a victim of the ravages of the pandemic.