Meeting with the Mayor of Teguise Oswaldo Betancort 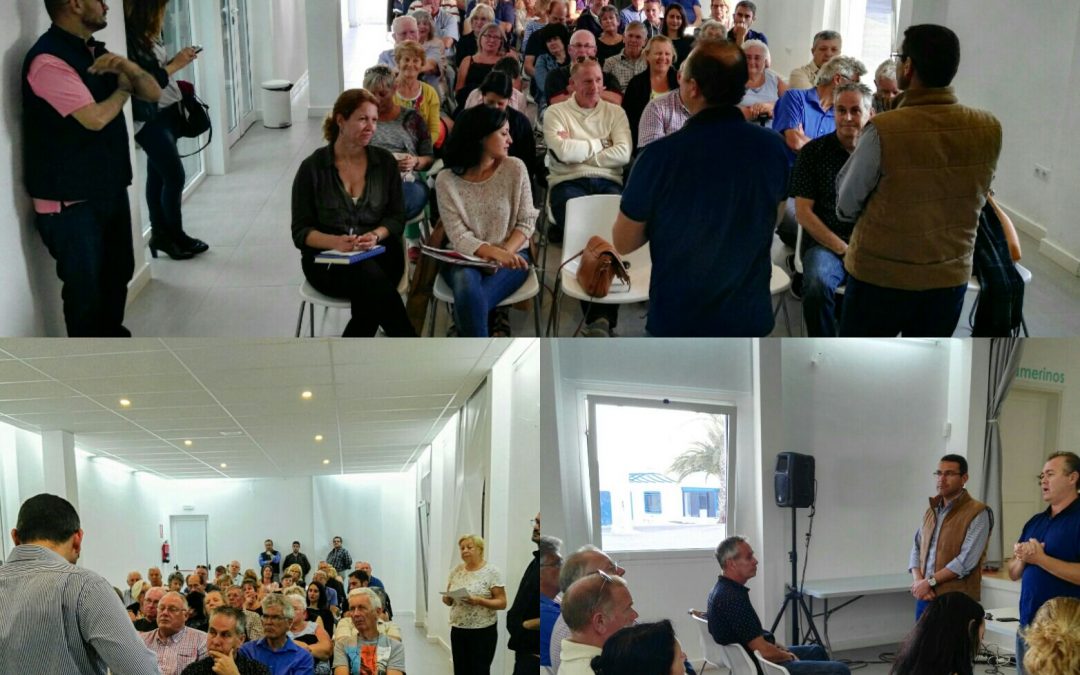 On Monday 20th March the Mayor of Teguise Oswaldo Betancort held his latest meeting with the English speaking residents and business owners of Teguise. The meeting took place at the Civic Centre in Costa Teguise. In attendance with the Mayor were Maripaz Cabrera, Concejal de Mercadillo, Tenencia de Animales, Comercio and consume, and Antonio Callero, Concejal de Turismo, Comunicación Institucional, Transporte, Parques and jardines. Daniel Trigg president of the Lanzarote Business and Residents Association kindly translated throughout the meeting.

There were just under 100 attendees and the meeting was voted a great success. At the start it was explained that it would be an interactive meeting and not just one sided with the mayor talking to the audience, and following the welcome and introductions questions began immediately.

Many questions were raised the first being the changing of the traffic direction in Calle Panama and the new site of the rubbish bins, the question was then raised about the amount of beggars outside supermarkets, and whilst it was generally agreed that it was unacceptable the point was made that it is not illegal for them to do this, but that social services are aware of the problem.

The next question was regarding the noise from the Diverhotel, particularly the loud music in the summer, when nearby residents suffered as they were unable to open windows and doors, the mayor said this problem had already been addressed with other hotels and that a letter would be sent to the offenders and if no action was taken taken the police would visit.

The next problem was the lighting on the bandstand in the Pueblo Marinero as they were turned off too early at night which left performers in the dark, the mayor suggested that the problem could be solved by fitting a new timer and that he would authorise the work to be carried out.

Mobility access problems was another issue and whilst it was accepted that many changes had been made i.e. lower kerbs at pedestrian crossings and better access to the beach there was still a problem with high pavements etc. The mayor explained that there was a mobility plan in progress and that residents could visit the Ayuntamiento to view it, particularly on a Tuesday morning when English speaking assistance was provided by the Ayunatamiento. It was mentioned that there was a difficulty in obtaining blue badges for disabled users and it was explained that this was not an Ayuntamiento service but that they would look into why there had been a delay in this instance.

The question of the new yellow boxes was raised with it being stated that people were still parking in them and that they should be better marked to say no parking. The mayor did say that there had been an increase in parking fines but that the matter could be addressed.

Construction and derelict buildings were issues also raised, and it was explained that due to economic problems, in the past, i.e. builders going out of business and premises having no licenses, but that there was a modular plan for Costa Teguise and investors are being actively encouraged to take on these projects. The mayor said that he was reluctant to use tax payers money to secure the abandoned properties and that the money could be spent on better things. There is a plan to build 23 new duplex properties with more hopefully following on.

Shortage of long term rental properties was discussed with people concerned over the lack of accommodation for people living and working here as many were now offering “holiday lets” to obtain more money and that long term lets were increasing in price, it was hoped that with the new properties being built that this would aid this situation and that residents should remember they have rights as tenants and should be aware of them, no one can be forced out. The problem of people letting their properties for “holiday rentals” in residential areas was also highlighted and it is hoped that when the new law is published this year that will help ease the problem. Anyone affected by this can complain to the Canarian Government who have a department to deal with complaints of this nature.

Squatters was another issue particularly the ones close to Club Tahiti and whilst they sympathised there was little they could do as this is out of their control and that social services were again aware of the situation. Other issues were discussed such as the gardening and public areas in Nazaret, plans for the area around the civic centre, Toca Sport (the area owned by the International school) will add to the sports premises a number of commercial premises. Future plans for “camping parks” only in designated, authorised areas i.e. Papagayo and La Graciosa.

The Paseo along Las Cucharas was discussed and the new project will include a tourist office and works should start at the end of 2017.

A request was made for better signage to distinguish the red cycle lanes around Playa Bastian as it was felt they were not clearly marked and that something should be done to stop the speeding of hired cycles and scooters etc to avoid further accidents.  More rubbish bins were needed again particularly in that area and the room was informed that these were on order and would be in place soon. There was a reminder about not dumping large unwanted items and garden waste by the basuras and that the Ayuntamiento offer a free waste collection service, to arrange collection call 928 845 999 / 928 845 994

There were one or two further questions and the meeting closed on a note of thanks to the mayor. In closing he stated that he felt these meetings were invaluable to all parties, and he appreciated that it was important to listen to all concerns, and that he was available twice a week in Costa Teguise, messages could also be sent via the email link on the Ayuntamiento website, and he actively encouraged people to use the Free assistance available on Tuesday mornings, saying it was vital that the service was used in order for it to continue.  He also offered to have a further meeting in a few months time in order to update the situation regarding the issues discussed on the evening.

Assistance is available every Tuesday. If you need help at the Ayuntamiento with your Spanish paperwork Teguise Ayuntamiento (la Villa) now offer a service to help non Spanish speakers with paperwork, paying bills, interpretations etc. Every Tuesday morning between 10.00 – 1.00 there will be an English speaking person in Teguise Ayuntamiento dedicated to assist you with any help you may need. Simply visit the Ayutamiento during these times or to make a prior arrangement email teguiseassistance@gmail.com and remember this service is FREE to you.