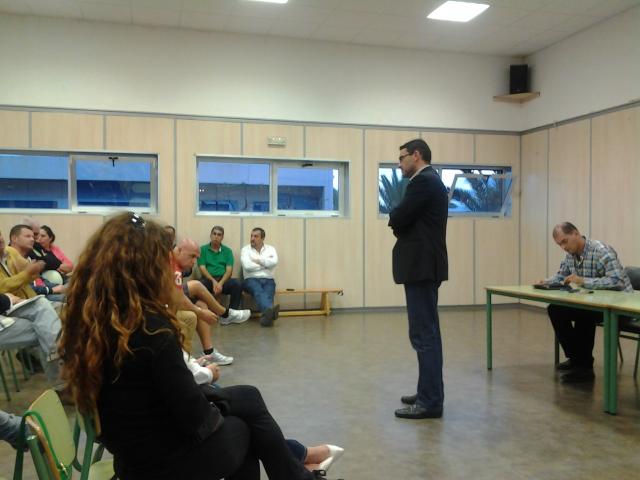 We recently informed you that the Mayor of Teguise, Oswaldo Betancort was holding a meeting for the residents of Teguise to attend. The Meeting took place last night and Silvia from the LBA attended and was able to take a brief number of notes. If anyone has a specific question that has not been covered below then please send it to us and we will forward it to Teguise Ayuntamiento on your behalf.

The meeting started promptly at 8.00p.m. and concluded around 10.15p.m. The Mayor was the only speaker, however there were a number of councillors present as well as Antonio Callero, head of Tourism for Teguise who was making notes.

He opened the meeting by inviting questions from the audience and then continued through the various topics. The most common topics were; Traffic signage, location of pedestrian crossings, rubbish bins, plastic rubbish bins and Secondary schools.

The Mayor stated that he would only talk about what is currently being done and what is about to be started. He would not discuss future plans or promises; they would be discussed at a meeting planned for later in the year.

Having been the elected authorities for one year and eight months, they want people to understand the budgets they have to work with. In 2011 it was 27 million, 2012, 25 million and in 2013, 23 million. There are some areas that they cannot and will not cut expenses. The repayment of loans inherited from previous authorities, which have had to be refinanced. Payment to suppliers (7 million), Cultura department and Asuntos Sociales, which is helping many families who are in a critical financial situation.

A representative from the El Palmeral complex, explained the problem they have because of the large rubbish bins that are situated in Calle las Piteras and the horrible smells the have to put up with.

Pedestrian crossings “above level” (“pasos de peatón con resalto”) They have the money to start work on a number of them and it is hoped to commence before the summer.

New tarmac in the car parks of Apartments Celeste, Las Cucharas and Pueblo Marinero, this work will be done in 2013.

Re. “Basura” Rubbish collection rates: It will be the same in all municipalities in 2014. It has been more expensive in Costa Teguise up to now, but there is to be a new company in charge of the collections.

Las Cucharas,Paseo Maritimo. The Mayor is not at all happy with the company doing the work; they are not a local company they are from Gran Canaria. The authorities have had meetings with Gesplan and with the Gobierno de Canarias. These are the people who have the contract/agreement with this company, and they will keep knocking on their doors. They want at least some parts of the Paseo completed before the summer.

The company working on the Jablillo area are local and there are no complaints about the pace of work, but the other company is showing signs of not working as originally agreed.

Bicycle lane, from Los Ancones to Las Caletas, approved to be financed by the Cabildo and the Ayuntamiento work to be done between 2013 and 2014.

Regarding security, 6 new Policía local, 4 new cars for the Police. There will be security cameras situated on the roundabouts (entrance/exit) before the summer (40,000€ already allocated)

Beaches, they continue replacing the sand where it is needed.

Wifi on the beach, it´s already working, although curently in a testing period, it was suggested to give it a try when you are in Las Cucharas. Also it is in the centre of La Villa.The aim is to have the 1st “Free wi-fi municipality” – BUT he stated don´t think you´ll be able to cancel your connection from home, this service will have a maximum period of use per day

Centro de Salud, Oswaldo said that they have already started the “war” with the Canarian Government for better and bigger premises and they will continue insisting, as they have the necessary land for having it built.

“Depuradora” near Villa Toledo (very bad smell) The President of Cabildo has visited the area and promised to have it re housed underground.

They also discussed the new Centro Socio Cultural, the need for better equipment, and for street lighting. They will improve the pavement on the now picón area along the Avenida de las Palmeras between Las Marinas and Lanzarote Bay roundabout.

The meeting then concluded.