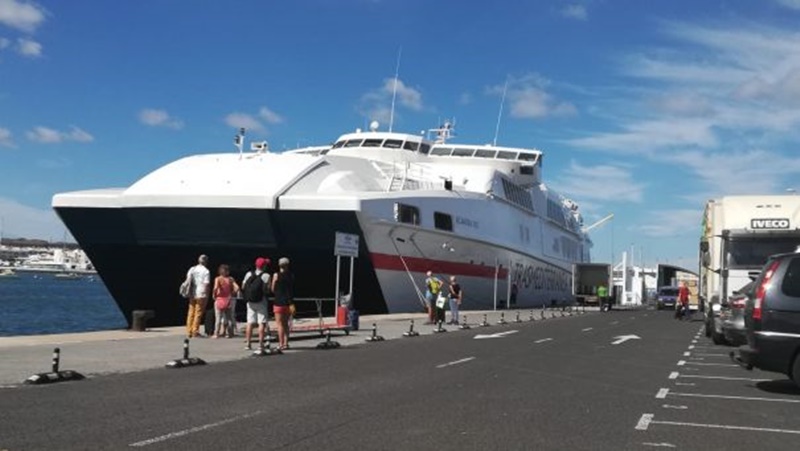 The public entity Puertos Canarios, chaired by the Vice President and Public Works and Transportation Councilor of the Canary Islands Government, Pablo Rodríguez, and manages the Managing Director, Manuel Ortega, registered during the year 2018 a traffic of 5,006,428 passengers of line regular between the ports of regional ownership, which supposes a total increase of 5% in relation to the year 2017.

Manuel Ortega said: “We are closing another year with figures that consolidate the regional ports as a platform for traffic and connection between the different islands. The year 2018 was dismissed with a record of 237,896 passengers more than in 2017. With this, the line of growth continues to be rising after stabilizing traffic after the high peaks generated with the 75% bonus on the passages of Canarian residents and after the start-up of the interior line of La Gomera “. In this sense, the director-manager of Ports Canaries stressed: “I am happy to be able to indicate again that the evolution of inter-island passenger transport is positive and encouraging. We will continue working to favor this situation and strengthen it, to promote an activity that promotes the union of the Canaries “.

The most exponential growth has been experienced by passenger traffic registered in the port of Morro Jable, located in Fuerteventura, which has increased by 5.51% compared to the previous year, with a total of 627,741 passengers, consolidating as one of the main connections of the island majorera with Gran Canaria. And, for its part, passenger traffic in the existing corridor between the port of Corralejo, in Fuerteventura, and the port of Playa Blanca, located in Lanzarote, which recorded an increase of 1% over the previous year with 11,239 more passengers , reaches the highest billing figure of the Canarian Port network with a total of 1,130,038 passengers.

Likewise, the port of Las Nieves, located in Gran Canaria, experienced a significant increase when it recorded a traffic of 1,050,311 passengers, which represents an increase of 3.69% with respect to 2017 and allows it to become the second port with greater growth in 2018, in addition to its consolidation as a connection platform with the island of Tenerife. Likewise, registered passenger traffic between the ports of Órzola, located in the north of Lanzarote, and the port of Caleta de Sebo, located in La Graciosa, experienced a small decrease of 0.1% in relation to 2017, reach a total of 437,700 passengers.On the island of La Gomera, with the launch of the interior maritime lines, the port of Vueltas has registered a total of 157,497 passengers and the port of Playa Santiago, the figure of 40,921 passengers. One of the interior lines, the one Fred operates. Olsen, was launched on September 9, 2017 and connects the ports of Vueltas and Playa Santiago with the state port of San Sebastián de La Gomera. It is a line that was reactivated after remaining inactive for five years, when it stopped operating in 2012. On the other hand, the second line started up, operated by Naviera Armas, began on October 21, 2017 and connects the State ports of Los Cristianos, located in Tenerife, and San Sebastián de La Gomera, with the autonomous port of Vueltas.