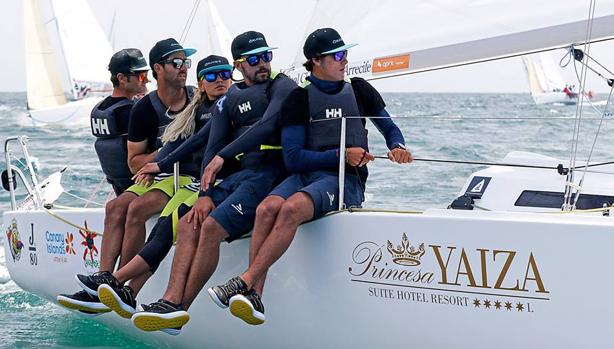 New world title for Lanzarote Rayco Tabares and his team. On board the “Hotel Princesa Yaiza” the young sailor rewrites his name and that of Lanzarote in big letters in international sailing to win his fifth world title, in a category as competitive as the J80, and set a new world record .

The team led by Rayco Tabares with the sponsorship of Hotel Princesa Yaiza and European Sport Destination, thus add their fifth title, fourth consecutive since 2015. They did marching in the classification of less to more without ever throwing in the towel.

The president of the Cabildo of Lanzarote, Pedro San Ginés, wanted to congratulate on behalf of the Corporation and on his own the crew of the ‘Hotel Princesa Yaiza Saliling Team’, for this award obtained in French waters. “Some sailors that suppose all a pride for the sail and the Lanzarote sport in general”, commented the insular president.

The ‘Hotel Princesa Yaiza Saliling Team’ has been skippered again by Rayco Tabares, who thus adds his fifth world title. The crew is completed by Lai Torres and Héctor González, with four titles each, in addition to Alfredo González and Alejandro Bethencourt who add their third world title in this class.