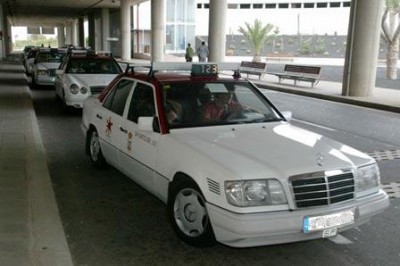 The Association of Independent Workers of Auto Lanzarote Tourism introduced Wednesday in Playa Blanca the new offices. The facilities, which have been donated by the Ayuntamiento, are refurbished and adapted to new technologies.

Also they presentated their the new website for online taxi reservations , which is already being tested and will soon be operational “one hundred percent” under “taxitourlanzarote.com.” This page is designed for tourists and residents to book a taxi and even make payment through it. For this purpose, with a payment gateway that includes support for leading credit cards in Europe.

The Association of Independent Workers of Auto Lanzarote Tourism say they have not stopped working “to get the best taxi service in the Canary Islands”. At first they opened new offices in Tias and then installed the system to centralize the telephone reservations service. Later municipalities that have been added are Tias, Yaiza, Teguise, Haria, Tinajo and San Bartolomé. They are putting in place the offices of Playa Blanca and shortly, they will proceed to the implementation of Costa Teguise.

“This is achieved by the humble work of all taxi drivers, and with the cooperation of our authorities. In this regard, I thank José Juan Cruz in Tias, Leonardo Rodriguez and Angel Dominguez, Yaiza, Oswaldo and Betancourt, in Teguise support and understanding they are having with the taxi industry in their municipalities” said its president, Martin Leocadio.