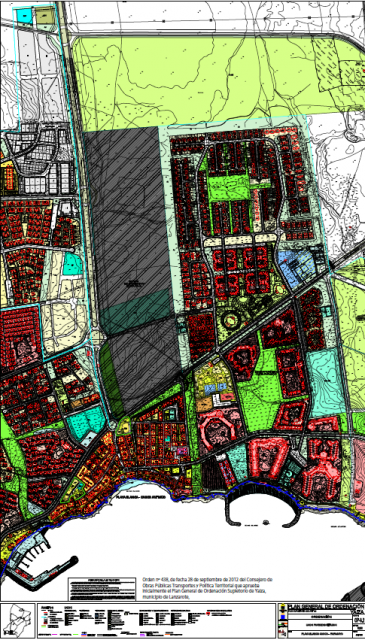 On Tuesday 16th October, Kevin Roper, head of the LPO commission together with LBA president Daniel Trigg and LBA secretary Silvia Garcia Hurtado attended a meeting in Yaiza with the Mayoress, Gladys Acuña.

At the meeting Ms Acuña explained that the Plan for Yaiza was officially published in the Boletín last Friday 12th October. She confirmed that there is a period in which to make allegations, however this is only for 45 days. During the meeting they had the opportunity to view the plan and looked at a number of the areas with one of the “técnicos” and the Head of the Departamento de urbanización (ingeniero). It was explained that the areas had been colour coded to differentiate between zones i.e. touristic, commercial, residential.  A further meeting has been arranged with the Concejal de Urbanismo next week. A copy of the plan can be found here Yaiza Plan.

Following this meeting there was an open meeting held at La Bocaina restaurant in Playa Blanca. The meeting was to outline why the LBA/ LPO had been formed, what its aims were and its achievements to date. Attendees were also able to find out first hand about the meeting with Gladys Acuña and the plans for Yaiza. At the meeting it was stressed that due to only having 45 days in which to make allegations, Playa Blanca owners needed to view the plans either at the ayuntamiento office or on the LBA website. Owners were urged to support the project and register their properties. The meeting ended with a question and answer session.