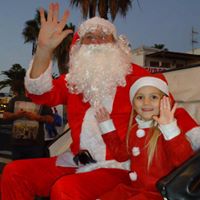 From its start one of the main objectives of the Lanzarote Business and Residents Association has been to promote tourism in Lanzarote through and with the cooperation of local businesses and residents.  The founders of the LBRA had already worked on the very first St Patrick’s day celebrations and conceived the idea of having a Christmas parade to bring the “spirit” of Christmas to Lanzarote to fulfil the missing excitement and atmosphere that many felt was needed at this special time of year.

Once the LBRA was officially formed in 2008 they continued to work on this idea and thanks to the contributions of so many people who believed in the idea, together with the LBRA staff and sponsors the first long anticipated Santa Parade in Puerto del Carmen took place on the 24th December 2010 and it was a fantastic success.

The association organised the whole event with the support of Tías Ayuntamiento who were responsible for permissions, security and road closures etc, the LBRA ensured that all arrangements were covered, which included not only the parade itself but the ancillary work that goes with it, which includes continual work to gain sponsorship and funding, permits, floats, performers, music and entertainment, together with the publicity and marketing and on the actual day itself setting up and overseeing the whole event. Annually it took months of work and many many meetings and without the LBRA staff, sponsors, volunteers and collaboration from the Ayuntamiento this event would not have taken place.

The event this year will take place on Friday 23rd December – meeting at 5.00 to start at 5.30pm and full details will be published nearer the date. If anyone is interested in having a vehicle or charity collection or providing an entertainment feature in the parade then they have to email…..turismo@ayuntamientodetias.es

Members of the public are of course welcome and as normal “Santa Outfits” should be worn.

We wish the Ayuntamiento continued success in what this has become “A major highlight of the Puerto del Carmen calendar” that has grown throughout the years and that gives endless pleasure to residents and visitors alike, and we would now like to thank the LBRA staff, contributors, supporters and sponsors who have worked tirelessly to ensure the success of each event. Too many to name but you know who you are.