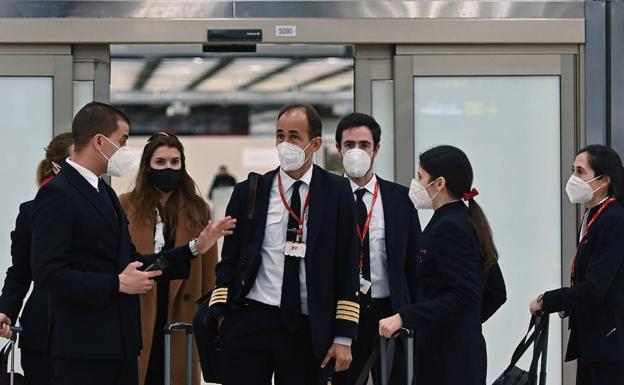 The Government of Spain has decided, in concert with Portugal, to suspend incoming flights from the United Kingdom from tomorrow, except for Spanish citizens or residents, as reported by the Secretary of State for Communication on Monday. The measure has been taken after the need to take coordinated measures was exposed in Brussels, as Spain claimed yesterday, Moncloa added.

The Government has made this decision after the meeting of the EU crisis mechanism, which today analyzed the effects of the new strain of coronavirus detected in the United Kingdom and has called for non-essential travel to be avoided. Therefore, Spain will suspend from tomorrow the entry into Spanish territory of citizens from the United Kingdom, except for Spanish nationals or residents in Spain.

Moncloa has explained that the decision is taken in concert with Portugal and will also entail a tightening of controls at the Gibraltar border crossing. The Prime Minister, Pedro Sánchez, has just had a conversation about these common decisions with the Portuguese Prime Minister, Antonio Costa.

Other countries have already taken the measure

With the decision of Spain, the number of countries that have decided to suspend the arrivals of travelers from the United Kingdom continue to increase. In some cases, it even extends to countries where the new variant has been detected, such as South Africa and Denmark.

On Sunday, it suspended travel by people from British soil for 48 hours at midnight, “including those related to the transport of goods (accompanied), by road, air, sea or rail.” It interrupted all flights with passengers from Great Britain and South Africa from this Monday at 00h00 until December 31, in principle. Nor can they access by sea, road or rail.

Russia announced Monday that it was suspending its flights with the United Kingdom for a week. After detecting a first case of contamination by the new strain on Sunday in a patient recently returned from Britain, it decided to cancel flights from the UK. Entry is forbidden to people who have been in Great Britain in the last 14 days. Those who have already arrived must undergo a test.

From Sunday at midnight, flights from this source were cut “at least” for 48 hours. Flights with passengers from Great Britain suspended from the beginning of this Monday until January 1. Ferries, except with trucks carrying goods with a driver, are not accepted.

At the beginning of December, a case of a strain of Covid-19 circulating in part of the United Kingdom was detected. They canceled flights from the United Kingdom from this Monday for 48 hours. Denmark has found nine local cases of the British strain. He announced on Sunday that he would suspend flights from Great Britain, a formal decision is expected during this day. From midnight on Sunday, flights and rail traffic from Great Britain have been interrupted for 24 hours.

Bulgaria suspended air links with the United Kingdom until January 31, Romania will do the same for two weeks from this Monday afternoon. Croatia has suspended passenger flights from the UK for 48 hours. Macedonia has cut off all flights from Britain and imposes 14-day isolation on those who were there. Poland will do it starting this Monday at midnight.

Czech Republic from noon on Monday, and Finland from this day for two weeks. Suspension of flights with passengers from Great Britain for 72 hours. It will interrupt its passenger flights from the United Kingdom from this midnight. Those who arrive after having been there in the last 14 days will be in strict quarantine.

India will suspend flights from GB until December 31. It will apply the same measure to aircraft from the United Kingdom, Denmark, the Netherlands and South Africa for two weeks. El Salvador banned entry to anyone who has been in Britain in the last month. Argentina suspended flights from the UK, and Chile will do so on Tuesday.