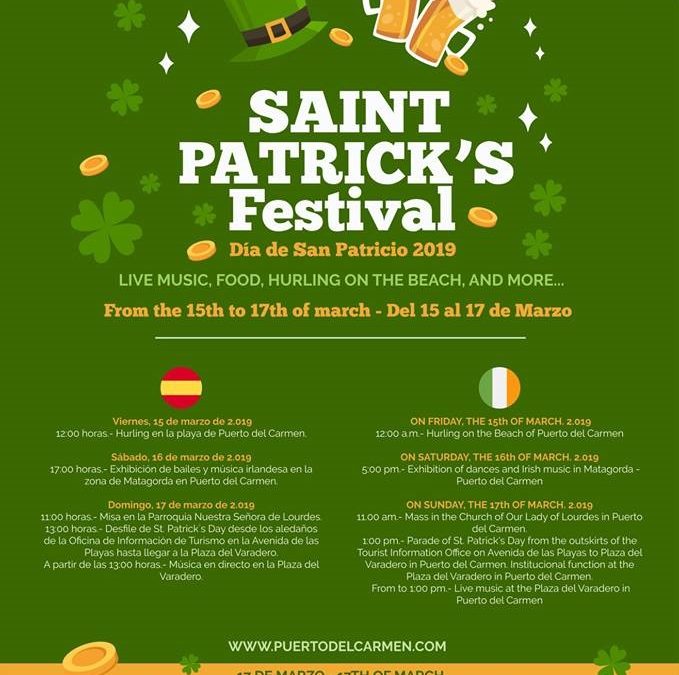 Puerto del Carmen, the leading area in the accommodation of Irish tourists who visit Lanzarote every year, joins the green and the clover this weekend as an element of loyalty of visitors to Ireland. This weekend the town of Tias will host several activities to celebrate St. Patrick’s Day, the patron saint of the Irish.

The Department of Tourism of the City of Tias, under the direction of the deputy mayor and councilor for Tourism, Amado Jesus Vizcaino, invigorates this ephemeris, of great tradition in ‘the country of clover’, with the St. Patrick’s Musical Festival where the Irish community resident in Lanzarote participates, which is joined, especially, thousands of tourists who travel to the island of volcanoes making this celebration coincide with their vacations.

According to statistics from the Data Center of Lanzarote, Irish tourism – which has Puerto del Carmen as its preferred area – registers an important annual increase towards Lanzarote.

The Playa Grande of Puerto del Carmen will host this Friday, March 15 , a competition of hurling (a team sport of Celtic origin, governed by the Gaelic Athletic Association, where you play with sticks “hurl / camáin” with which hit a “slither” ball). It will be the third edition on the beaches of Tías. On Saturday, March 16, the eve of the feast of the patron saint of Ireland, there will be several exhibitions and Irish musical performances in the Matagorda area. The City Council of Tías incorporates for the first time this sector of Puerto del Carmen in the revitalization by St. Patrick’s where, in recent times, new pubs dedicated to this tourist market have opened, such as La Tiñosa, which concentrates the majority.

On Saturday, the 17th, the day of the patron saint of Ireland with a huge Catholic tradition, a mass will be celebrated at 11 am in the church of Puerto del Carmen with the assistance of the municipal authorities. At 13 hours the parade will take place from Playa Grande, in the area of ​​the Tourism Office, to the plaza of El Varadero, in La Tiñosa, where the mayor of Tías, Pancho Hernández, the deputy mayor and councilor of Tourism will participate. , Beloved Jesus Vizcaino, and the honorary consul of the Republic of Ireland in Lanzarote, the lawyer Eileen Izquierdo Lawlor.

The traditional St. Patrick’s parade will be this Sunday, March 17, from 1:00 pm from the vicinity of the Tourism Office on Avenida de las Playas towards La Tiñosa, until reaching the nerve center of the festival celebration in the square of El Varadero.

As of 1:00 pm on Sunday, the St. Patrick’s Festival will start with the performances of bands and musical groups, some of them coming from Ireland specifically for this lively festival.

The councilman of Tourism of Tías, Amado Jesus, that the past month of January attended in Ireland to the act where Lanzarote was awarded as Best Winter Destination by the Irish travel agencies. Each year the boom that the celebration of San Patricio in Puerto del Carmen has acquired as a promotional attraction is noticed.

Turismo Lanzarote awarded the Distinguished Tourism Award in its events mode a few years ago.

In 2017, a total of 266,773 Irish tourists visited Lanzarote, compared to the 184,870 that arrived in 2010. Volumes that show the high interest that Lanzarote has among the Irish, where they prefer Puerto del Carmen as a leading area for overnight stays. In January 209, Irish tourism grew by 2.3%. The balance of influx of this market to Lanzarote during 2018, according to the Data Center of Lanzarote, 291,428 people.

The celebration of St. Patricks Day in Puerto del Carmen has the collaboration and support of the Irish Community resident in Lanzarote, the Cabildo of Lanzarote and the Government of the Canary Islands.