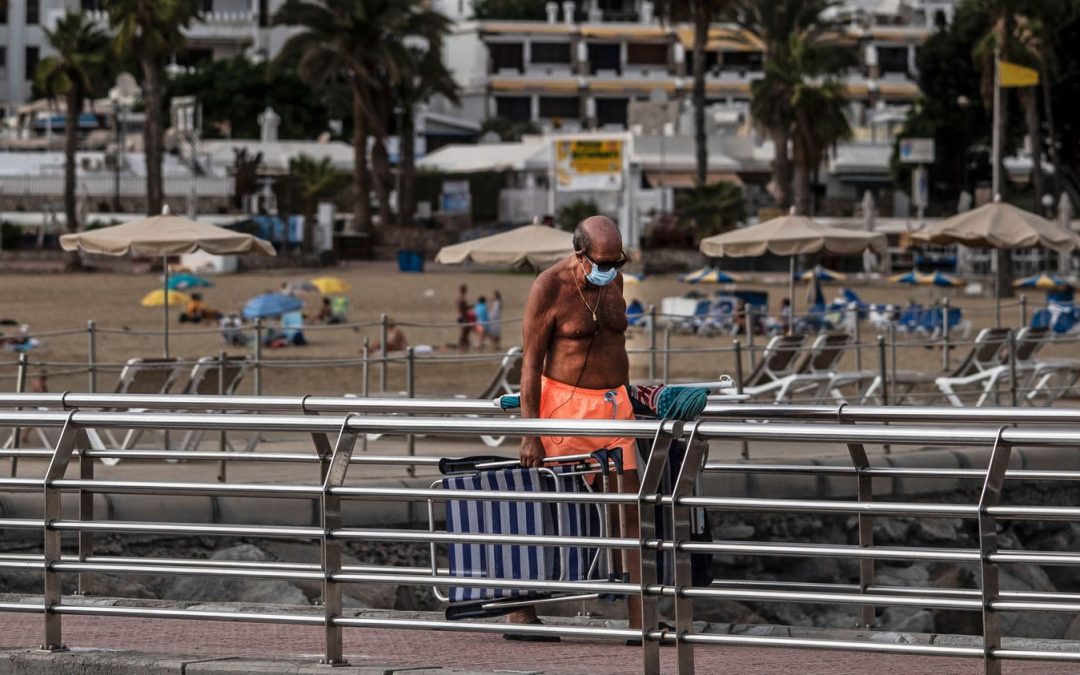 The Dunes of Maspalomas, one of the coastal gems of the Canary Islands, have been a silent witness to the fall in tourism in the Spanish archipelago. Despite the pleasant 22ºC weather, its beach bars are closed and the sun loungers are stacked up along mile after mile of deserted sand.

With less than a month to go before the start of winter, which is the high season for tourism here, this image has set off alarms everywhere. The regional economy has a lot to lose: the tourism industry represents over a third of gross national product (GDP) and provides four out of every 10 jobs in the region.

Tourism has been languishing as a result of all the restrictions imposed to fight the coronavirus pandemic. And the new requirement for a negative PCR test for visitors coming to Spain by air or sea, which went into effect on Monday, is the last straw, according to industry representatives.

The PCR tests are expensive and difficult to access in many countries, leading to a drop in bookings

JOSÉ MARÍA MAÑARICÚA, PRESIDENT OF THE FEDERATION OF HOTEL AND TOURISM ENTREPRENEURS OF LAS PALMAS

Business leaders and government officials in the Canary Islands claim that this poses a risk for the region’s peak tourism season. While the regional government introduced a similar requirement on November 14, affecting not only foreign visitors but Spanish ones as well, the difference is that antigen tests were admitted in the second case.

The tourism sector says that the quicker, cheaper antigen tests, which deliver almost immediate results, did not affect bookings. But as soon as the PCR requirement went into effect, demand plummeted. Hotels, travel agencies, tour operators and airlines are pushing for the government to accept antigen tests as a way for visitors to prove that they are free of the coronavirus. Otherwise, they say, the winter season will be lost.

“This makes tourism non-viable due to the expense of PCR tests [over €100 per person]. When mobility is allowed again in Britain and Germany, it is very likely that they will not come to the Canary Islands in these conditions,” said a representative of the Meliá hotel chain. Another major hotel brand, Iberostar, also wants authorities to accept antigen tests.

The obligation to produce a negative PCR test taken no more than 72 hours before arrival currently affects tourists from 65 countries where the 14-day cumulative number of coronavirus cases per 100,000 inhabitants is over 150. This list will be reviewed every 15 days according to the risk map offered by the European Center for Disease Control (ECDC), as established by the Spanish government in the Official State Gazette (BOE).

Jorge Marichal, president of the hotel association Ashotel, notes that the Spanish executive rejected PCR tests in the summer, yet embraces them now that there are other alternatives. He also underscores that the European Commission recently recommended the widespread use of rapid antigen tests, which are less reliable but produce faster results.

The government says it is working to reach a European agreement on joint rules for accepting the results of antigen tests. “We are going to defend this position within the EU. It’s an important step for the Commission to have recommended [the tests],” said a source at the Spanish Tourism Ministry.

“It is essential for Spain to use its influence in Europe to get this changed,” said Juan Molas, president of the tourism board Mesa del Turismo. “The PCR tests are expensive and difficult to access in many countries, leading to a drop in bookings,” added José María Mañaricúa, president of the Federation of Hotel and Tourism Entrepreneurs of Las Palmas.

The regional government agrees with industry leaders. The tourism chief, Yaiza Castilla, recently described the PCR-only requirement as “a stone blocking the path.”

The move casts a new shadow over the sector’s hopes to save the winter season following a lost summer. These hopes had been fueled by the creation of safe travel corridors between the Canaries and two countries that account for the bulk of visitors to the islands, Britain and Germany.

“Tour operators are already canceling flights because they can’t deal with the cost,” said Santiago de Armas, head of the Lopesan hotel chain. Raúl González, CEO of Grupo Barceló, agreed: “Everything gets more complicated. Faced with constantly changing measures, some customers would rather not travel until things get resolved.”

But the demand is still there, and recent experience shows that antigen tests do not slow down visitor flows. The sector is now hoping for a government announcement accepting the faster antigen tests. Otherwise, more hotels could close in the coming weeks, warn industry leaders. “It’s not going to be a good season. We are even considering closing some of the hotels that are open,” said a source at Meliá.

The government of the Canary Islands is also looking forward to December 1, when confinement measures will presumably be lifted in England. Regional premier Ángel Víctor Torres has set that date as the deadline to reach a negotiated deal that will make the central government accept both PCR and antigen tests for visitors coming by sea or air to the country, including to the Canary Islands.

In the meantime, there will still be two rules in place: the national one requiring PCR tests from international visitors, and the regional one requiring antigen tests for Spanish nationals coming to the Canary Islands and staying in hotels or other kinds of tourist accommodation.