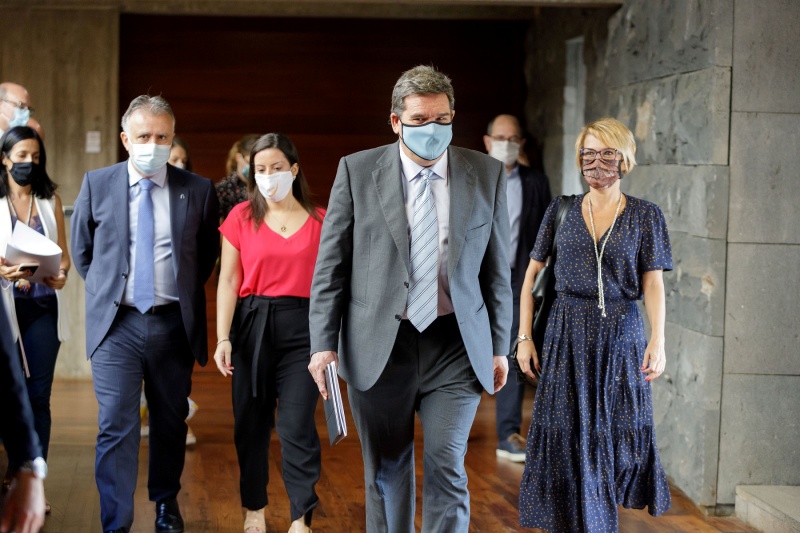 The Canary Islands obtains guarantees from Minister Escrivá that this is the case and the announcement that 6,000 island households will receive the Minimum Vital Income from this October

This meeting focused on the approved extension of the Temporary Employment Regulation Files (ERTE) until January 31, which Ángel Víctor Torres considers “key for the Canary Islands”. The president praised the capacity for consensus that the tripartite table (central government, employers and unions) has shown “in these difficult hours” and considers this tool “a fundamental cushion to maintain the welfare state and guarantee their position” to thousands of workers. “.

The head of the regional executive received the support of the minister for the ERTE to be extended beyond next January 31, if the economic situation due to the pandemic requires it. José Luis Escrivá insisted that the central government “has always been aware” of the singularities of the Islands due to the weight of tourism. “For this reason,” he said, “ERTEs are a flexible instrument adaptable to the evolution of COVID-19”.

According to data from the Ministry, the Canary Islands had 230,000 people in ERTE during the worst stage of the confinement and still have about 83,000. This means that 13% of the employed population is still under the protection of this mechanism, while 65% has returned to their activity, a percentage that is “much lower” than the rest of the country. In fact, the Islands are, together with the Balearic Islands, the autonomous community with the highest weight of ERTE.

For this reason, Escrivá assured that a firm public action is required and “I have transferred to the social agents that, although the ERTE have been extended until January 31, in no case is it prejudged that they cannot be prolonged any longer, but rather they are adaptable to the elements of a pandemic that we have learned is changeable, “he said.

President Ángel Víctor Torres also highlighted that the royal decree-law of last June on ERTE included an additional express provision on the Canary Islands and that, in this renewal until January 31, all the requests of the Canary Islands Council have been addressed. Labor Relations. Among others, that 70% of the regulatory base be maintained as a benefit, that the inactive workers of affected sectors and temporary employees enter, that everything be done through the work centers or that the affections due to outbreaks of cases have coverage 100% “in the first month.” Ideally, it should not be necessary to renew them, but, if necessary, they should be extended, “he remarked.

For the minister, the meeting this morning has been “extraordinarily fruitful” and has served to verify “the great climate of social dialogue existing in the Canary Islands, which is exemplary and a reference for all.”

José Luis Escrivá also stressed the relevance of the collaboration with the Canary Islands Government regarding the Minimum Vital Income, “especially when, a few days ago, the Island Executive approved the modifications of the Canary Islands Insertion Benefit (PCI) so that it could be temporarily compatible with that Minimum Income “. In his opinion, this will help the tranquility of citizens in a vulnerable situation, increases the amounts of beneficiaries of the IMV through supplements and shows that the Canary Islands “have been one of the regions that have best understood” this aid. As announced, some 6,000 Canarian households will receive this Minimum Income from this October, “and we want to go further in the coming months.

Today was the first of the meetings that the minister will hold with representatives of the Canarian administrations during his official visit to the Archipelago. Tomorrow, the president of the Canary Islands will meet again with the minister to discuss the immigration situation in more depth. The minister underlined, yes, the “enormous effort that this Government is making to face the exceptional situation that the Canary Islands are experiencing at this time.” However, he is aware that more resources will be needed and he is committed to working in a more stable host network.